C is a structured programming language that designed originally by Dennis Ritchie, working at At & T Bell Laboratories in New Jersey. it is one of the most widely written computer programming languages in the world. It is easy for debugging, testing, and maintenance and a remarkable language. 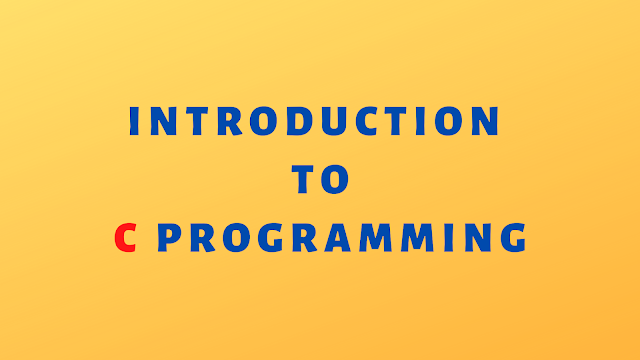 It is one of the most popular computer programming languages today because it's high-level structured and machine-independent. we can develop programs without worrying about the hardware platform no matter where they will be implemented.
It is also called a high-level compiler language. and the main aim of C is to provide an easy and natural way to giving instructions to a computer. it is also used for general-purpose programming, which means we can write small programs to a complex application.
This programming language has features that allow a program to be organized easily and logically. and it is an essential feature for writing a complex and large application.
It allows meaningful variables names and meaningful function names to be used in programs. that gives us the power to write code more efficiently and complete freedom of style, also it has a set of constructions and decision making functions that used to control the flow of programs.
C give use to build a compact and neat program and tries to make the best of a computer by linking as closely as possible to the local environment. it has also several pre-defined header files, data types, variables names, function and directive to handle the complex part of the program.
Also, it has some powerful operators like increment and decrement that given us the power to reuse the code with the functions and pointers that help us to take the reference of variables.
The development process of C programming started with an older language called BCPL that developed by Martin Richards. it is also called a middle-level programming language. and that is not because it is harder to use. rather c is the language that combines the elements of high-level languages with the control and flexibility of assembly language.
C allows manipulation of bits, bytes and addresses, and basic function, elements that run the computer. another feature is that the code written in C is also very portable. means if we write a code for one software then it can also be implemented by other software.
Every high-level programming language supports the concept of data type that defines a set of values. and C supports some good data types like integer, character, and floating-point. apart from that c has also several built-in data types. Unlike other high-level programming languages, c cannot check for no run time error. means it previously didn't determine whether a given array was overrun by its length or not.

In c a program's main structure is defined by the functions. functions are the building blocks in which all the activity of a program occurs. like the main() function in C Program. using the functions we can define the separate task in a program. there are some programming languages like COBOL and BASIC that are not made for programmers.
But C was created and filed tested by the programmers and worked for programmers. and in a simple line, we can say "C gives a programmer what the programmer needs". Initially, c was used for system programming that forms a portion of the computer's operating system or makes support utilities like compilers, liners, and editors.
Because of its portability and efficiency, many programmers used it in their all task and because they liked it! at the time of its creation. but at the time of C++ programming creation, some programmers thought that C would be replaced with C++ but that case doesn't happen. because not all programs or applications require the object-oriented programming features that provided by C++. also another main reason is that most of the application was created in the C programming at the time of C++. so that also keep back C++ from the place of C.
Add Comment
c programming
Saturday, May 29, 2021